Get Our FREE eBook
'How To Overcome Emotional Eating'

How YOU can stop deforestation now! 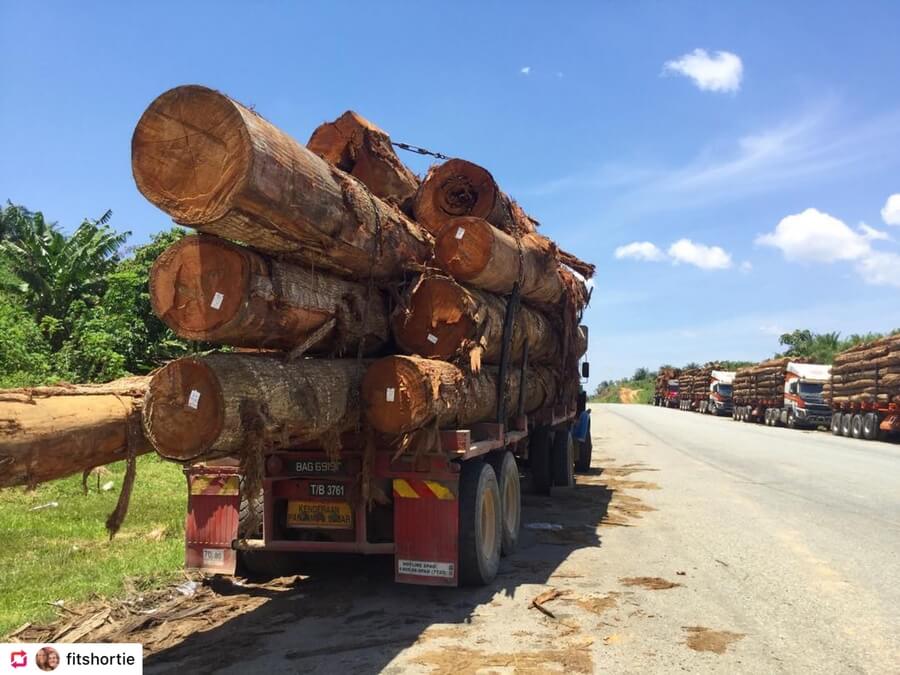 We are on the East coast of mainland Malaysia during a multi-month road-trip on a scooter with all our belongings. The fruit situation in Kuala Terengganu was no bueno. All old, cut durian, no season whatsoever. After just one night we had to escape. Continuing our loop north to Kelantan no longer made sense. The further up the east coast the more grim the fruit situation was getting. There was only one way we could head, west. Back into the depths of mainland Malaysia. Easier said than done! We had the enormous national park Taman Negara in our way. The biggest stretch of jungle on the mainland. At least that’s what we thought until we found out more about the deforestation because of palm oil.

130 miles of jungle without civilisation 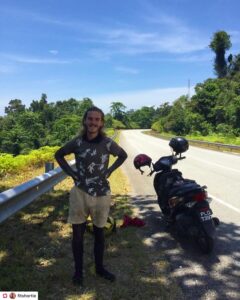 Looking at the map the situation was not going to be easy. We could ride along the north edge of the park to Gua Musang (hometown of Musang King durian) but the empty stretch of road in the wilderness there was 210 km from town to town! Two hundred and ten kilometres (130 miles) without as much as a gas station, a village or homestay to cut the trip in two is challenging on a scooter. Usually we’d split such a stretch over a few days plus tank the bike 3 times on the way. Yet here we had to do it all in one go. A little bit hesitant, we decided to go for it.
I downsized a dress, Simon threw away a pair of old running shoes. All to make space for extra gas in the trunk. Armed with a full tank and sitting on 6 extra litres of petrol, aware of the possibility of having to set camp in the jungle, we headed out. Despite the huge stretch we had to cover in one go (without any food on us due to all space taken by extra gas) in the end it was all so worth it. 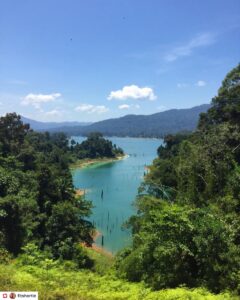 This was no doubt the most beautiful part of mainland Malaysia we’ve seen so far. Mountains covered with primary jungle. Huge monitor lizards crossing the roads. There was even signs ‘Beware of wild elephants crossing’. We didn’t get to see elephants but their presence is real. Three times did we see fresh elephant poop on the road. How did we know it was elephant poop? Well, one ‘poop pebble’ so to speak, is the size of a motorcycle helmet.

And those lakes! What you see here is just a fraction of Lake Kenyir which is an enormous, intertwined lake system within the jungle. It stretches over 100kms and it took us over an hour till we passed the lake labyrinth in between the jungle mountains. The colour of the water is bright turquoise whilst its surface is speckled everywhere with old tree trunks. Magnificent! If you have the chance, I know there is a few upscale resorts within the Kanyir lake system where they will take you on a boat to reach them. Judging by the nature Id say its totally worth it.

All in all it was a glimpse into what Malaysia looked like back in prehistoric days before it was destroyed by deforestation because of palm oil. And destroyed is sadly the only word I can use. Until now, the biggest stretches of the evil palm oil we’ve seen in SE Asia have been Kalimantan & Sumatra. Having combed through Malaysia from Penang to Singapore and back up to Terengganu – it’s fair to say mainland Malaysia wins this sad competition. There is more palm oil plantations here than anywhere else we’ve been to.

Why is palm oil bad? Because it means the nature has been destroyed to plant it. Where there is palm oil, there is no wild jungle stretches except for small patches that are too steep for planting. No forests to hike, no rivers or waterfalls to bathe, no space for fruit farms, no jungle produce, no fruit stalls along the road. Complete deforestation because of palm oil. Driving between two towns that only have palm oil between them, you’re gonna have to be buying imported produce in a supermarket on the road as no fruit grows there. How sad is that considering we are in such a lush, tropical climate?!

Be aware of what you support

The deforestation because of palm oil is a problem no less urgent than the deforestation of the Amazon for cattle farming. The palm oil corporations are as powerful as petroleum giants and one can feel powerless in fighting them. A silent march or a naked protest isn’t going to work here. The only thing you can do is vote with your dollar. Check labels for palm oil. You’ll be surprised 40% of supermarket products from cosmetics to pastry contain it. Stop buying your precious peanut butter and start making it yourself. When in Asia – don’t eat restaurant food as it will surely be fried in palm oil as it is the cheapest oil around. These are small changes in your own life you can easily implement to stop the deforestation because of palm oil. 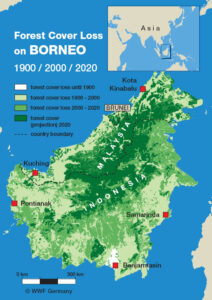 These may seem like small changes, but this is how we do it – as a grass roots movement. Back in the 80’s people still smoked on airplanes and in offices and in the 90’s everyone would take an extra plastic bag at the cashier just because they were free. With education and personal changes we made these things a faux pas and in the same way we can root out palm oil. I think that in a hundred years from now people are just going to look back and say: I can’t believe that in 2020 they were still cutting down primary jungle for palm oil?! Hopefully by then we still have some tropical rainforest left. At the current rate it does not look good. The map on the left from WWF (wwf.panda.org) shows the deforestation rate on our beloved Borneo in Malaysia. You can click the picture to see it in full detail

It’s not just the palm oil

In the meantime, as we circled the huge Taman Negara national park, over the next days we saw dozens of these trucks like in the first picture of this post. Trafficking huge beautiful jungle trees cut down to make space for palm oil. So sad. This picture was taken at a restaurant amongst the plantations where we stopped to buy some mangosteen. The truck drivers took an hour or two to eat their lunch whilst all this time every single one of these dozens of trucks was left running to keep the A/C on! This is insane people – its bad for your economy as well as disastrous for the air pollution and the environment!

What do you think about this

Let us know what you think about this whole situation and how we should tackle this huge problem of deforestation because of palm oil in the comment section below!

We are happy to let you know our new eBook is now available. You can check it out HERE. 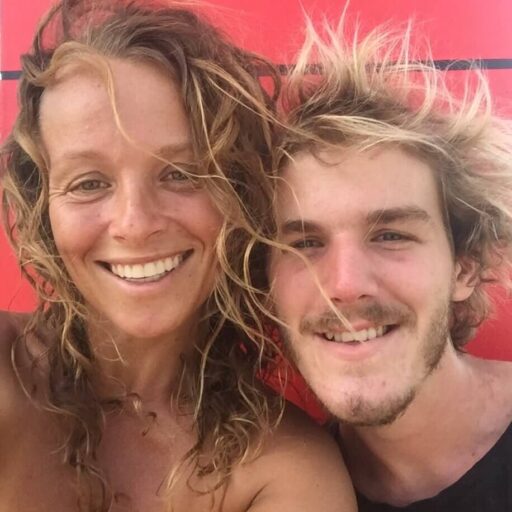 Our adventure began on Instagram when Simon aka Chippy looked up #fruitarian and was magnetized by Tina’s juicy fruit pictures.

Half a year later once in Bali he suggested a meet-up. Inseparable since that first meeting, together they became insatiable in the hunt for the rarest best-tasting fruits on the planet.

Combing through the most far-flung jungles they have documented their journey on Instagram and Youtube where their adventures are enjoyed by millions of people worldwide!

Simon and Tina are the creators of The 30-Day Raw Food Challenge, the health & weight loss program designed to help you reach your optimal weight & incredible health without calorie restriction.

If you liked this post you will love The 30-Day Raw Food Challenge!

If you liked this post you will love
The 30-Day Raw Food Challenge! 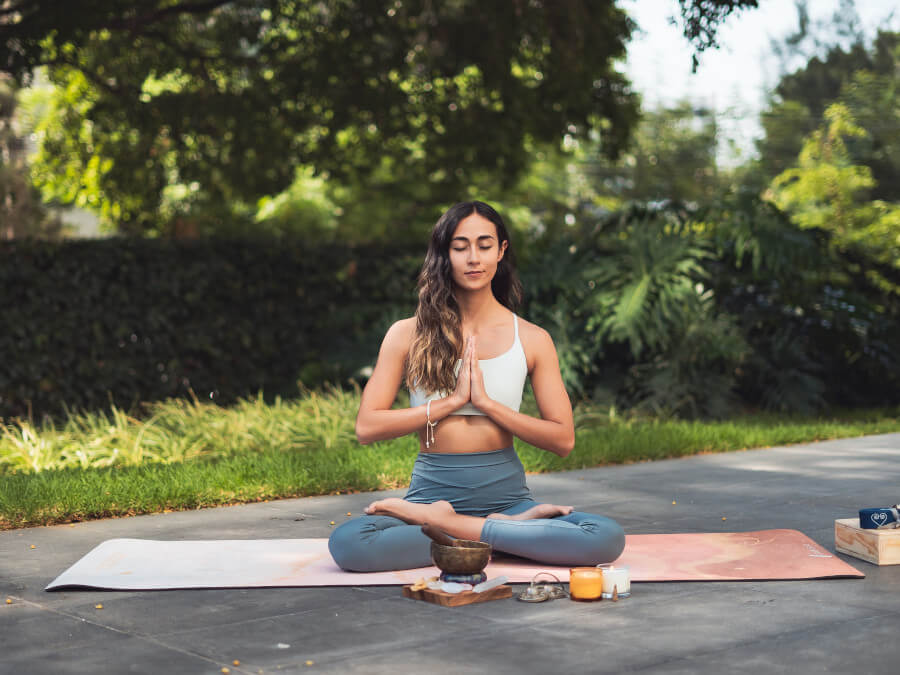 5 steps to raise your vibration instantly!

How YOU can stop deforestation now! 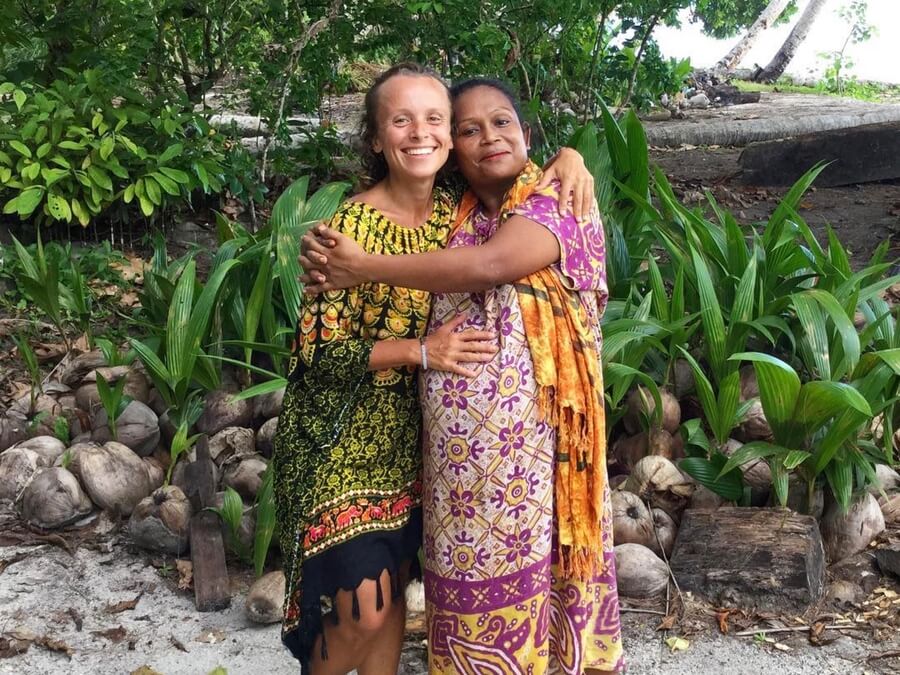 How to learn any language in 6 months 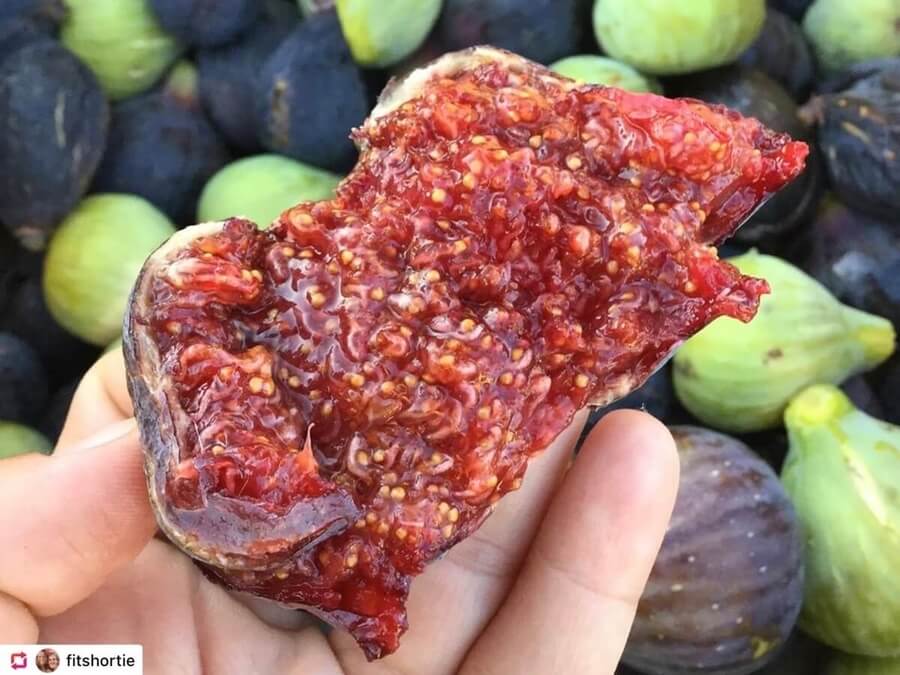 How to eat figs the right way

Where should we send your free guide? 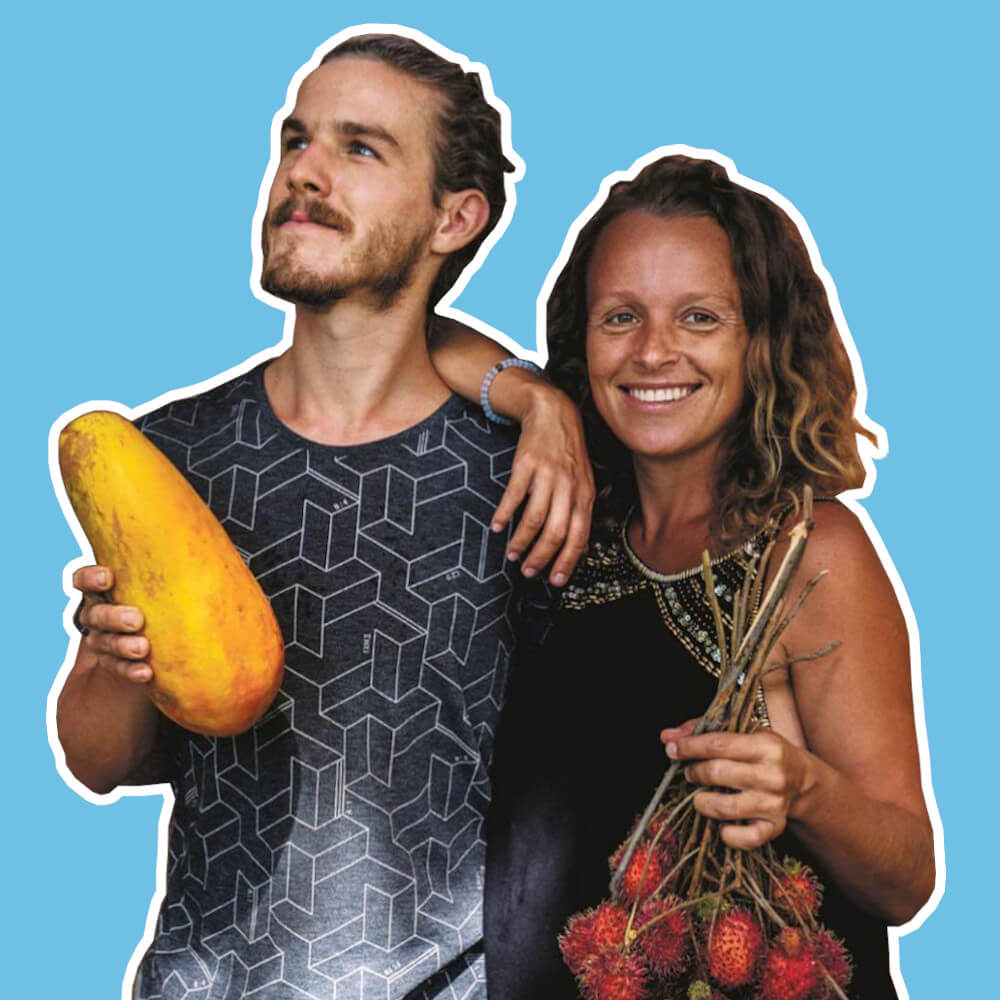 Get Your Free Seat Now!

Where should we send your free eBook?

Where should we send your free eBook?

Get Your Free Seat Now!